A knowledge graph (KG) represents real-world entities and their relationships. The thus represented knowledge is often context-dependent, leading to the construction of contextualized KGs. Due to the multidimensional and hierarchical nature of context, the multidimensional OLAP cube model from data analysis is a natural fit for the representation of contextualized KGs. Traditional systems for online analytical processing (OLAP) employ cube models to represent numeric values for further processing using dedicated query operations.

Knowledge Graph OLAP (KG-OLAP) adapts the OLAP cube model for working with contextualized KGs. In particular, the roll-up operation from traditional OLAP is decomposed into a merge and an abstraction operation. The merge operation corresponds to the selection of knowledge from different contexts whereas abstraction replaces entities with more general entities. The result of such a query is a more abstract, high-level view on the contextualized KG.

The following figure draws an analogy between (a) the roll-up operation in traditional OLAP on numeric measures and (b) merge and abstraction in KG-OLAP on KGs. First, the example emphasizes the fact that traditional OLAP and KG-OLAP work on distinct types of data. The example’s general setting is air traffic management, where messages dispatched by air traffic control notify of temporary changes in infrastructure. In traditional OLAP, the description of real-world events is condensed into numeric measures, in this example, the OLAP cube captures the daily number of messages dispatched by air traffic control per geographic segment and message importance. In KG-OLAP, each cell of the cube contains knowledge, encoded as triples, valid and relevant in the context that the cell represents, in this example, knowledge about navigation aids of varying importance, valid on a particular day, and relevant for a specific geographic segment. 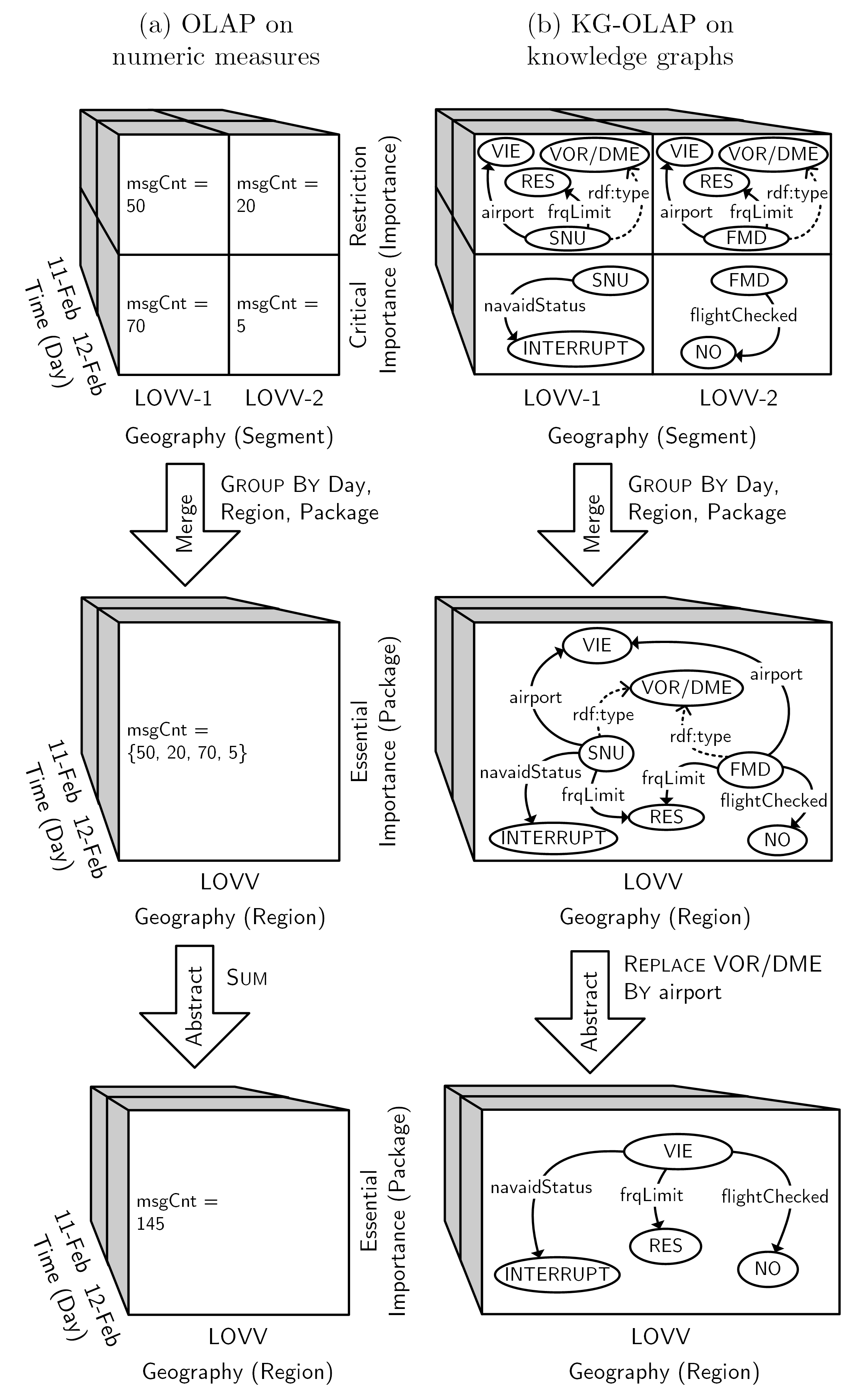 In particular, the KG-OLAP cube comprises knowledge about navigation aids used for approaching Vienna airport (VIE): the VOR/DME (i.e., a type of radio beacon) in Sollenau (SNU) and the VOR/DME in Fischamend (FMD), which are located in different geographic segments. On the one hand, that knowledge concerns restrictions, namely limitations of frequency (frqLimit), indicating usability of the navigation aid’s frequency to be restricted (RES) to certain sectors (not shown in the example). On the other hand, there is the flight critical knowledge about a temporary change in SNU’s operational status to INTERRUPT and the fact that FMD is currently not “flight checked”, i.e., has not undergone mandatory, periodic security checks. To illustrate the idea of merge and abstraction – the main types of operations in KG-OLAP – the roll-up operation in traditional OLAP can be considered a sequence of merge and abstraction. In traditional OLAP, the merge operation obtains a collection of numeric values for each grouping of cells by day, flight information region, and importance package; each geographic segment belongs to a region, each importance to an importance package. Then, the abstraction operation applies the SUM aggregation operator on the collection of numeric values to obtain an aggregate numeric value. In KG-OLAP, the merge operation first combines triples from the more specific contexts into a more general context. Then, the abstraction operation replaces each VOR/DME entity by the target of its airport property to obtain a more abstract representation of the knowledge about navigation aids at Vienna airport. Just like there are different aggregation functions for numeric values, there are different variants of the abstraction operation for KGs. In addition, in case of KG-OLAP, there are different variants of the merge operation. In KG-OLAP, merge and abstraction may also be conducted repeatedly and in an arbitrary order.

The RDFpro rule inference engine computes context coverage as well as the materialization of inferences and propagation of knowledge across contexts. The current implementation, for evaluation purposes, loads the repository into an RDF model in main memory, performs inferences, and writes the model back into the repository. RDFpro, however, also supports stream-based computation using the Sesame/RDF4J RDFHandler interface.

The operations are realized as SPARQL \lstinline{SELECT} statements that return a “delta” table, i.e., a tuple query result where each tuple represents an RDF quad along with the indication of the operation (-, +), which specifies whether the quad must be added to or deleted from the target repository in order to obtain the result. The following extract of a delta table shows an example of a delete and an insert delta tuple, which in that case corresponds to a triple-generating abstraction that replaces runway individuals by the airport individual that the runway is situated at.

The KG-OLAP system employs off-the-shelf quad stores, including in-memory stores. You have to create a base and temporary repository before creating a KG-OLAP cube. We recommend using GraphDB with heap size explicitly set:

The KG-OLAP system comes with a benchmarking feature that allows to run performance experiments. When executed in benchmarking mode, the KG-OLAP system produces two log files for each query execution. The first log file captures the timestamps of both the beginning and end of certain operations (“wall time”), e.g., the execution of the SPARQL query calculating the “delta” table. Note that capturing wall time has its drawbacks for microbenchmarking but in this case we think it is acceptable: We are not dealing in the range of milliseconds but several seconds to minutes for large datasets with millions of statements. Benchmarking mode also captures elapsed CPU time before and after operations. The second log file captures general statistics about datasets and query operations, e.g., number of total statements, number of computed delta statements.

A number of predefined (procedurally generated) datasets and corresponding benchmark queries demonstrate the KG-OLAP system. Note that while the number of contexts and statements in the generated data sets remain stable, the randomly generated identifiers and literals differ across instantiations. There are also minor discrepancies in the number of total resources.

Using the predefined datasets and queries, we ran performance experiments on a virtual CentOS 6.8 machine with four cores of an Intel Xeon CPU E5-2640 v4 with 2.4 GHz, hosting a GraphDB 8.9 instance. The Java Virtual Machine(JVM) of the GraphDB instance ran with 100 GB heap space. The JVM of the KG-OLAP cube, which conducts rule evaluation and caches query results, ran with 20 GB heap space.

The GraphDB instance comprised two repositories – base and temporary – with the following configuration; please refer to the GraphDB manual for further information. The entity index size was 30 000 000 and the entity identifier size was 32 bits. Context index, predicate list, and literal index were enabled. Reasoning and inconsistency checkswere disabled; the KG-OLAP implementation takes care of reasoning via RDFpro rule evaluation.

The GitHub repository contains log files from our performance experiments as a reference benchmark in the benchmarks directory. Note that we provide the uncleaned log files: In some cases, the first benchmark runs produced exceptional results which were probably down to a slowdown in the GraphDB instance after multiple runs. Subsequent results showed the expected behavior. We exclude the exceptional results from statistical evaluation but keep them in the log for transparency’s sake. You will find the R scripts used for evaluating the log files in the benchmarks/r directory on the GitHub repository, which also perform rudimentary data cleaning tasks.

We also provide the generated datasets and resulting delta tables from our performance experiments as downloads: